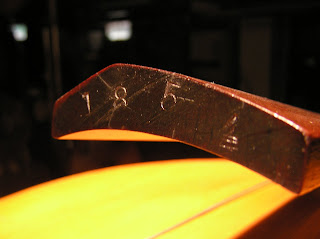 This bass has been on the bench for a short time but has been waiting in the wings for almost 2 years. It has interesting history and I feel it was one of the early Epiphone basses to come out of the Philadelphia factory. My history shows Epiphone moved their manufacturing from New York to Philadelphia after a long labor strike in 1953. The serial number being stamped on the end of the fingerboard, I think indicates this was beginning of a new era for the Epiphone bass manufacturing location. According to history, the craftsmen who refused to move from New York to Philadelphia formed the Guild Guitar Company in 1953. With this bass steeped heavily in the Epiphone legacy we are giving it the full Bass Monkey spa treatment WITH the super tuned Lonnie modifications. Over all the bass was in good condition. We found the old end pin was glued into place with a bunch of shims…a pretty poor job of trying to keep the end pin knob in place. After much wiggling Lonnie successfully removed it in preparation for a new ULSA rosewood endpin. The new endpin is a really nice match to the reddish rosewood fingerboard. 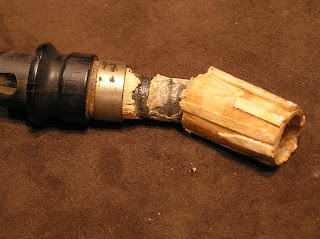 Lonnie has become quite impressed with the volume and tone of the 1953 Kay bass we just finished, so he has decided to do the modifications to the bridge and tail piece again. This time he has lightened the bridge even more and hollowed the tail piece. The rock maple tail piece on this bass proved to be more of a challenge then the Kay rosewood tailpiece. The rock maple wood was much harder…we had wood shavings and splinters galore in the workshop. Lonnie has even taken this one step further this time by adding color to the back of the tailpiece to give it the same patina as the front. The goal with his modifications is to keep the bass as original in appearance as possible but bring out the maximum volume and tone…plus he loves the challenge. 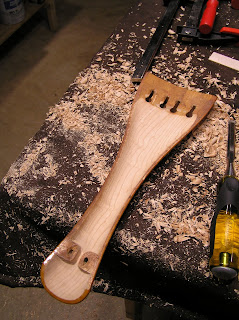 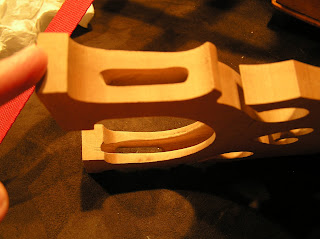 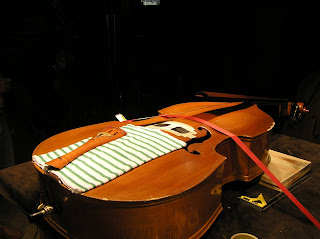 This bass is getting the following upgrades:

New rosewood ULSA endpin
Hi-Tec tail gut
Saddle re-shaped
Custom carved, fit and hollowed Despiau Bridge
Sound post refit with an adjustment
The rosewood fingerboard has been dressed and oiled
The nut has been re-shaped
New Thomastik Spirocore mittels (mediums)
The neck has been re-set and shimmed for a tight fit
The edges of the bass have been touched up and colored to match

Even though this bass visually was in great shape we have found ways to improve the playability and make it healthy for the next 50 years or more. This one will soon be completed and ready for a jam. We have been so enamored by the 1953 Kay bass “Vince” that we will need to set it aside and give this bass named “Jethro” some playing time. Yeah...the name Jethro came from a two bass purchase on one road trip…we acquired Homer & Jethro on the same weekend. For all you bluegrass fans…you will remember Homer & Jethro and their silly songs…these names just came from one long car trip where we got a little silly from lack of sleep.

Stay tuned for the final unveiling of Jethro…it is going to be a really nice Epiphone bass for the collection.
Posted by The Bass Monkey Workshop at 8:15 AM