With festival season approaching activity in the workshop will slow down as there are many new chores to take up our time…with that said we are still fussing over the American Standard bass. We have laid the 1953 Kay bass to the side; it is about a quarter of the way into a new set up. We want to do some additional string experimenting on the American Standard.

The American Standard bass has a ton of sustain and the volume is good but I want a better tone from this bass. The first set of strings we tried were the Thomastik Dominants solo, which I like on a 43” string length, but for some reason the bass did not like these strings. We moved on to the full set of Velvet Garbo’s…I love these strings. They are very easy to play and the A and E were outstanding but the G and D were still not quite what my ear wanted to here from this bass.

American Standard basses are huge in body size and string length. These basses are known for their big tone and are highly sought after by the professional players. To drop a few names that had and still do play American Standard…Roy Huskey Jr., Kent (Superman) Blanton, Kip Martin, Mark Fain, Barry Bales, Marshall Wilborn, Jere Cherryhomles…and the list goes on. I have high expectations for this bass and with all Lonnie’s efforts…we are going to get it right!

We played at a local jam with the full set of Garbo’s on the bass and I had the opportunity for two other bass players (one semi-pro) to play the bass while I listen from 15 feet away. She pulled some great volume out of the bass with the Garbo’s but it is still not the ultimate string for this bass and my ear. So while the bass sat in the stand and Lonnie proceeded to work on the set up of a friend’s bass I began to think…and think…and think. Then it hit me…Thomastik Spiro mittels (mediums). This bass is in tip top shape, with all the efforts and the new ebony fingerboard, the neck and the top can with stand the Spiro mediums higher tension.

Normally I am not a fan of the Spiro mediums for a vintage bass as the tension can be too much for the top and neck, but on this bass…we know it is solid because we have looked and studied every inch of this bass. Lonnie and I discussed it and at 9:30 last night…ZOWIE…we hit the combination. We removed a set of used Thomastik Spiro mediums from another bass (1953 Epiphone) and strung them on the American Standard…and there was THAT tone I was looking for!!! Just like that, this bass went from a great bass to an awesome bass.

Now the bass has the punch, sustain, volume and the TONE my ear wants to hear. So there we stood at 10:30 at night looking at each other grinning from ear to ear…we hit the bass and string combo that brought this old beauty front and center. I now understand why Thomastik Spirocores are a faithful stand by for so many bass players.

Now that we have hit the right combination for my ear on this bass, we are ready to take this big old bass to an outdoor festival and shake the leaves off the trees. I will give a full report on how we make out.
Posted by The Bass Monkey Workshop at 6:43 AM No comments: 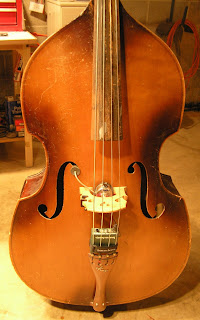 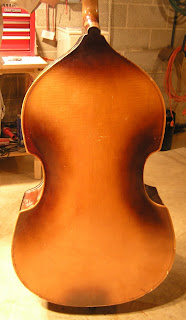 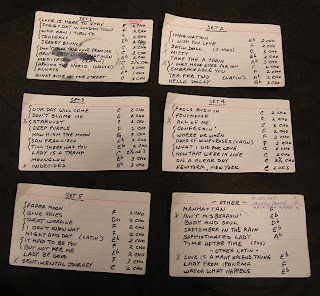 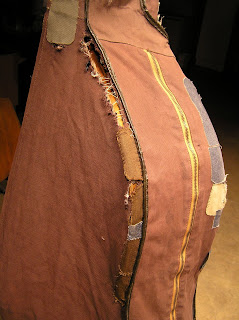 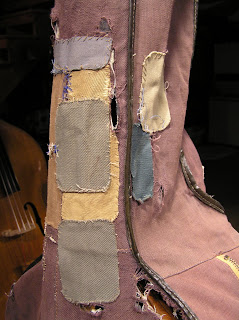 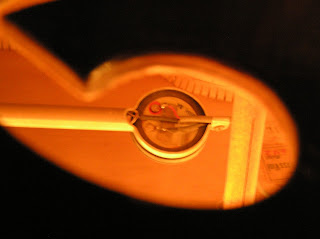 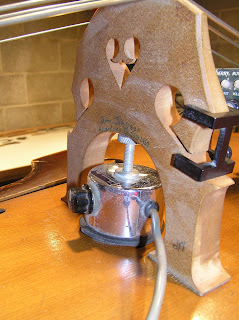 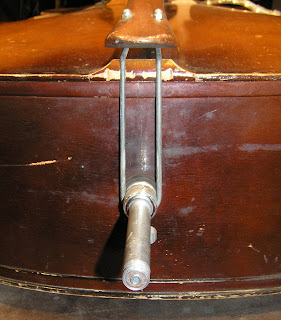 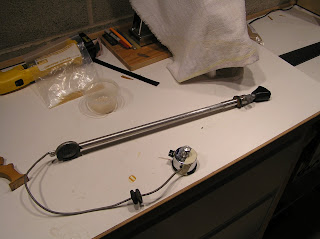 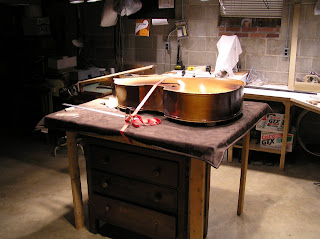 This bass is set to get the Bass Monkey spa treatment: new end pin, new tail gut, new bridge, new strings, dress the fingerboard (which is maple not rosewood), adjust the nut and saddle and maybe we will replace the missing volute…we shall see. We hope this is a fairly quick and painless project having just finished up a year long project. With festivals an outdoor yard work coming into season there will be little time spent in the work shop the coming months.
Posted by The Bass Monkey Workshop at 6:07 PM 2 comments: 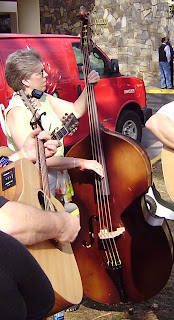 We are back from the maiden voyage with the American Standard…all went very well. Lots of nice compliments…the old timers like the sound of this bass, big and boomy. And that smile was on my face most of the weekend.

Posted by The Bass Monkey Workshop at 6:48 PM No comments:

So now that we are at the finish line I need to look back at this bass’s journey.

The bass came from Pell City, Alabama in 2006 where we purchased it from gentlemen who wanted to buy his son a new bass. He didn’t want him to play this old worn out bass that he acquired from a pawn shop many years ago. This is where we come into the picture, we had the bass shipped from Alabama in a huge, heavy, oversized crate…it was expensive to ship.

This bass waited its turn in line for another year until Lonnie could start the restoration process. The bass came to us unplayable with no strings so we had no idea how it sounded. There were several start and stops on this bass as other projects (and life) got worked in around it. With this bass came many new discoveries, new repairs and more hours of labor. It has now easily been a year and a half in the making but this bass has a new lease on life. Hopefully our efforts will make this bass remain playable for another 60 years. 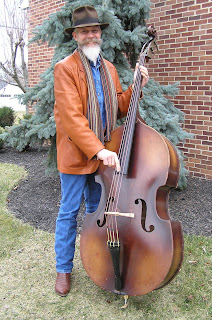 Posted by The Bass Monkey Workshop at 3:51 PM No comments: