What's going on in the workshop isn’t always about basses? Lonnie has taken a slight detour with an idea to fabricate some SUPER SIZE finger picks for a jam friend.

We have a regular Thursday night jam with the locals at the community center; one of the regular pickers is a Dobro player with HUGE hands and fingers like stumps. He is a great Dobro player but you can always count on him to have a finger pick fly off or drop during a good break. His fingers are so large for years (he is 72 years old) he stuck the largest finger picks he could find on the very tips of his fingers and then glues them on…yes…glues them to his finger tips. The finger picks barely go around his finger and they cut into his cuticles. 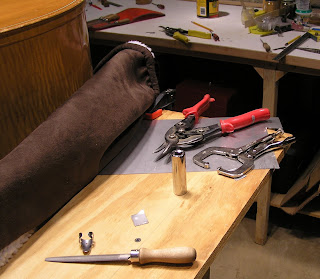 Well, Lonnie being a welder and fabricator for many years once told Neal…I’m going to make you a set of picks that fit your finger. Of course Neal looks at him in disbelieve and say “I’ll give you a million dollars if you can do it”. As I said before…don’t challenge Lonnie and say it can’t be done…because he will prove ya wrong. Last Monday after work he stop and got the flat stainless steel…certain grade, right thickness, blah, blah. He got them cut out and roughed enough for a test fit Thursday night. I think Neal was in disbelief and still doesn’t think Lonnie can deliver the goods. Tonight Lonnie is shaping the metal and smoothing the edges. He is going to make some fancy design in the band and the polish them up like a new shiny penny. We even have a little box with velvet lining to put them in for presentation…we are crazy…I know. 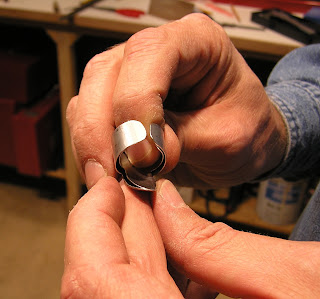 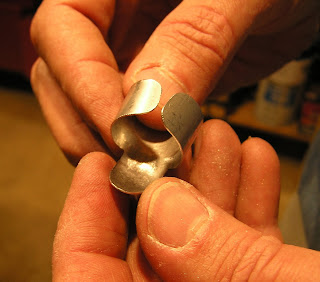 The best part is Lonnie knows he can do it and Neal will be left speechless…well maybe not speechless but at least we won’t have to watch him pick up his finger picks two or three times a night. Lonnie will get back to the bass soon; right now he is on a mission. He knows he should be working on the bass but he loves a new challenge…Bass Monkey custom size finger picks. 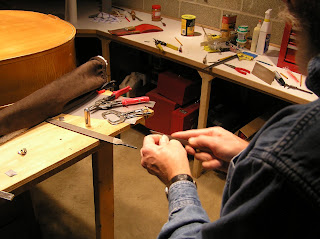 Stay tune for pictures of the final out come…it should be fun.

Posted by The Bass Monkey Workshop at 3:29 PM